Cork City maintained their perfect start to the season with a 4-1 win over Sligo Rovers at the Showgrounds.
An opening goal from hat-trick hero Graham Cummins was quickly followed up by a spot-kick from former Rovers man Kieran Sadlier as Cork raced into the lead.
Cummins grabbed his brace during the opening stages of the second half. Adam Morgan did give Ger Lyttle’s side hope just short of the hour mark when he found the net from twelve yards after Caolan McAleer was taken down by Alan Bennett in front of goal.
However there was little doubt of the result when John Caulfield’s charges made it 4-1 at the death as Cummins grabbed his third when he latched on to a cross from Shane Griffin.
Rovers finished the game with ten men. Rhys McCabe dismissed late on.
The champions moved into an early lead with just two minutes played. Karl Sheppard found himself in space inside the area before his cross found the alert Cummins who headed past Mitchell Beeney from close range for his second goal of the season.
Seamus Sharkey dragged Aaron Barry to the ground inside the area before Sadlier stood up  to blast home from twelve yards.
Beeney could only watch on as Gearoid Morrisey’s weighted effort from the angle slipped agonisingly wide of his far post.
Sligo’s only chance of the first 45 arrived in the final minute of the half. Rhys McCabe’s ball across the box picking out Caolan McAleer who landed his attempted lob on the roof of the onlooking Mark McNulty in the City nets.
Cummins made the most of a mix-up between Beeney and Kyle Callan-McFadden before he was left with a simple tap-in.
Rovers were offered a way back into the game just short of the hour when McAleer was upended by Alan Bennett inside the Cork box. Morgan’s turn arriving for him to convert from the spot for his second goal in as many games.
City left the Showgrounds in little doubt as to the final result on the stroke of full-time. Cummins completing his hat-trick as he slotted home Griffin’s squared ball from the left side.
Sligo Rovers: Mitchell Beeney; Gary Boylan, Kyle Callan-McFadden, Seamus Sharkey (Calum Waters HT), Partrick McClean; Caolan McAleer, David Cawley, Craig Roddan (Adam Wixted 65), Rhys McCabe, Alistair Roy (Greg Moorhouse 71); Adam Morgan.
Cork City: Mark McNulty; Steven Beattie (Colm Horgan 65), Alan Bennett, Aaron Barry, Shane Griffin; Conor McCormack, Gearoid Morrisey, Barry McNamee (Garry Buckley 80); Karl Sheppard, Graham Cummins, Kieran Sadlier (Jimmy Keohane 71).
Referee: Derek Tomney. 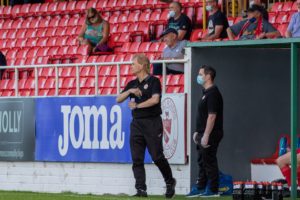