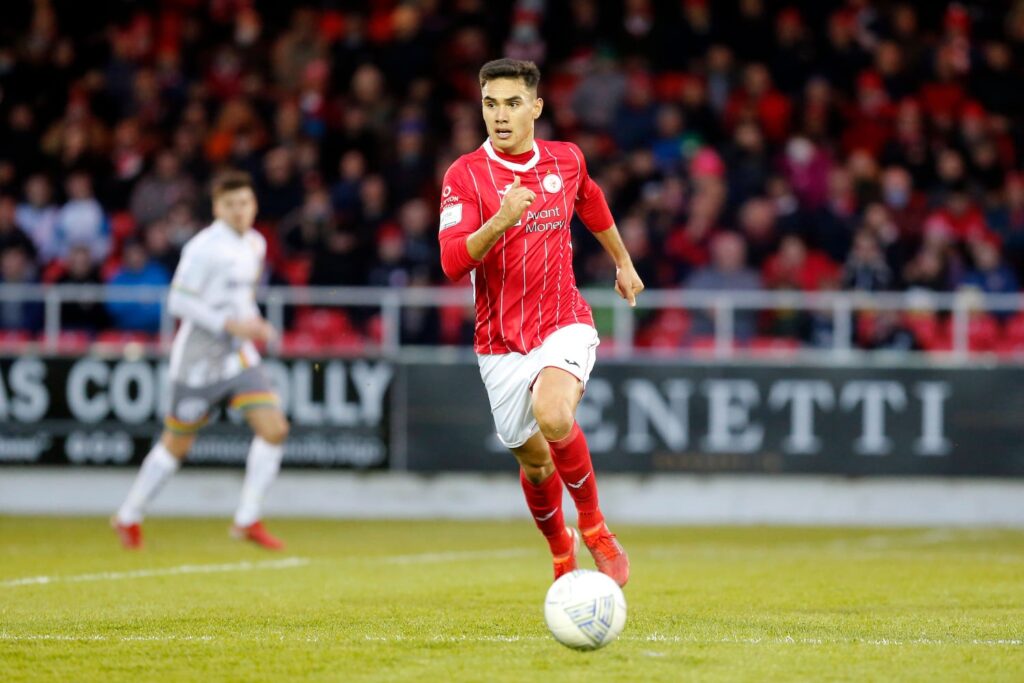 Despite being only 21, New Zealand striker Max Mata has already racked up his fair share of air miles having played in his native country, Switzerland, Estonia and America. It was after finishing his season with Real Monarchs in the States that he got the call about playing in Ireland and he had no hesitation in signing:

“My agent called me to say that there was interest from a club in Ireland which turned out to be Rovers. I didn’t really have to think twice about it as I wanted to get back to Europe as I felt it was better for my career in general and that there were more opportunities for me there. So I made the decision straightaway to sign. I didn’t know much about Ireland to be honest, I had met a few Irish people before but I guess I didn’t really know what it would be like. I didn’t know it was going to be as cold as it is!”

New Zealand are well represented with Mata joining up with his compatriot Nando Pijnaker but didn’t get a chance to speak with Ryan DeVries who had left the club just before he signed:

“Yeah I had heard that Ryan played in the League of Ireland but didn’t actually speak to him about the club before I joined. It was awkward timing as he had left just before I signed so I never spoke with him but do know that he played here for two seasons and did some damage which was good. The situation with Nando was that his club were sending him out on loan for the second time. He was obviously looking to go somewhere he would get game time and where he would be given a good opportunity. And he has gotten that here and is playing well and proving that he is a good player. So far it has been going perfectly for us; we are both settling in and get the chance to do things off the pitch together. We actually both played together briefly at Grasshopper in Switzerland. We were there together for half a season but the season was cut short by COVID.”

Mata started off his career in New Zealand playing with his local youth side before signed by A League team Wellington Phoenix. He was also playing under-age with his country and his performances for them brought him to the attention of a number of sides in Europe including Swiss Super League side Grasshopper Zurich:

“Yeah I started off with Wellington Phoenix. I didn’t come up through the ranks with them but was asked to sign for them when I was 15. Then I moved to Eastern Suburbs who are a professional club in New Zealand to get more game time. I played under-age with New Zealand as well and it was playing for the U-17’s at the World Cup that I got spotted by Grasshopper. They basically offered me a trial and brought me over for a month and told me that they wanted to sign me. I missed the transfer window deadline for the end of July so went home and came back over in November and stayed there for a month and then signed in January. It was definitely difficult to settle into life in Switzerland as there was the language barrier which made things difficult in terms of getting around. Anytime I went to do anything there were always problems unless the person spoke English which wasn’t that uncommon but it isn’t their first preference as they are not as comfortable speaking it. It was a big culture shock and a different type of football for me which made it worth it.”

Mata found his first team chances limited with Grasshopper but found his feet when he was loaned out to Estonian side Nomme Kalju as he scored 12 goals in 20 games for them and also played for them against Celtic in an Europa League qualifier:

“I got the chance to go on loan with Nomme Kalju in Estonia and this was something I wanted as I was hoping to get more game time. I had been in preseason with Grasshopper to get ready for the new Swiss season and joined Kalju halfway through their season as theirs was a Summer one. I came in at a good time as they were playing Champions League qualifiers and then Europa League ones as well as their League matched so it was back to back games. It took a little while to adapt to their culture but when it clicked then I started scoring goals and was hungry for more. At the end of my loan move Kalju were interested in signing me but Grasshopper weren’t interested in letting it happen. It got to a point then where it was made pretty clear to me that I have no shot of making the first team squad. I wanted to play in a professional league and the chance to play in America popped up and it was everything I was looking for. Unfortunately things didn’t go as well as I would have hoped although there were some positives for me to take from my time with them.”

Now starting to settle into life in Sligo, Mata had impressed in his opening weeks of the season with a brace against UCD and a goal against Dundalk to add to some other all around good performances. Since then a calf injury sustained against Finn Harps has hampered his receent weeks but he is keen to get back on the pitch to help Rovers and also to earn his way back into the international side for whom he has one cap:

“I’ve scored three goals and we had a decent start to the season and have a good bunch of players here and a good staff and there are a lot of good people working for the club as well. I enjoy the whole community in Sligo because everyone knows everyone and that’s quite cool. I know I have to keep working hard and give 100% effort and hopefully take my chance when it comes and help the team to win matches. Those who watch football don’t watch training and only get to see you and what you can do when you play. Being out on the pitch is the most fun thing in life, nothing beats playing football. It’s all I want to do. I want to play more international football but getting picked for the squad is predominantly based on form so that means I have to find my feet here and start scoring lots of goals which will give me the best chance to back into the squad which is definitely something that I want to do.”

Mata will once again be available for selection in our next game with Finn Harps at The Showgrounds on June 18th.