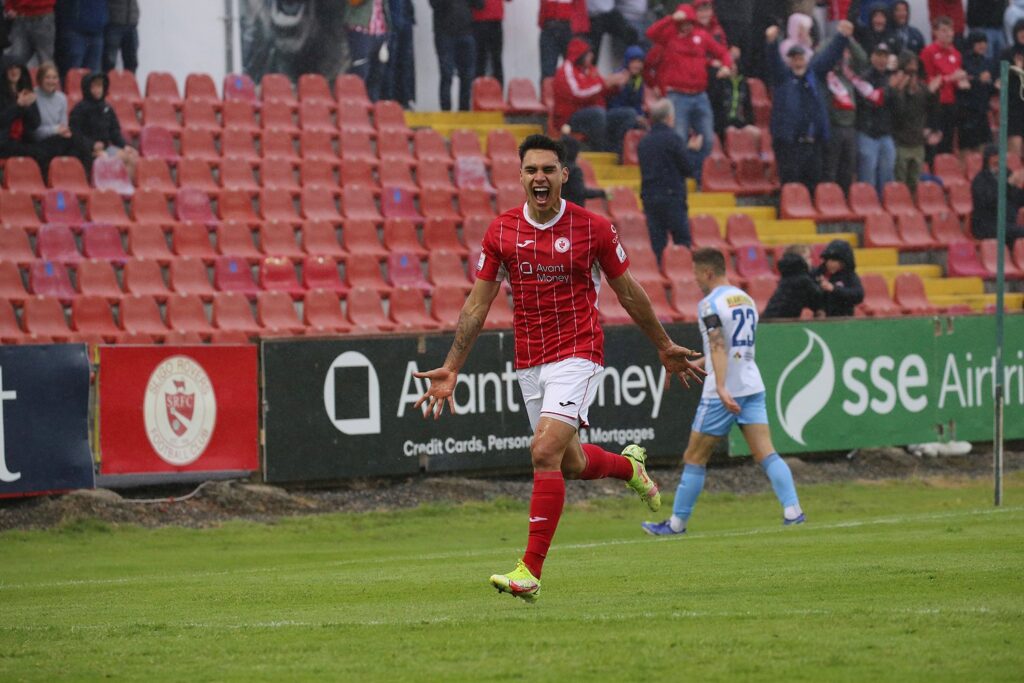 The Bit O’ Red made it three home wins on the spin lastnight at a rain soaked Showgrounds against Dubliners Shelbourne.

Manager John Russell made one change to his starting line up from last week’s draw against Drogheda United, with Nando Pijnaker replacing Lewis Banks at the back. Garry Buckley wasn’t risked as he continues to recover from injury, with the defender expected to play in this week’s Europa Conference League tie with Bala Town.

The visitors started the better and took an early lead when Jack Moylan ran towards the Rovers penalty area before finding JJ Lunney inside the box. Lunney teed up Brian McManus who’s shot was deflected past Ed McGinty to give his side the lead.

Rovers recovered well from this early setback and went in search of an equaliser and they got it on 23 minutes. Niall Morahan’s defensive header found Aidan Keena inside his own half. Keena flicked it into the path of Will Fitzgerald who drove forward across half way before slipping in Max Mata who beat Aaron O’ Driscoll and powered a shot low under Brendan Clarke for his fourth goal for the club.

It was all Rovers at this stage and it wasn’t long before we took the lead. Shane Blaney passed to Paddy Kirk at left back and he played a forward ball to Mata who turned it around the corner for Aidan Keena to run onto. Keena drove towards the area before teeing up Mata again who looked to be working an angle to shoot but he spotted Keena in a better position and the striker beautifully dinked the ball over Clarke and into the net for his tenth goal of the season and to put John Russell’s side in front at the break.

The second half was as action packed as the first. Both sides looked for a fourth goal with Rovers playing some nice football from back to front but it was the visitors who came closest on a couple of occasions late in the half.

First, Jack Moylan’s cross come shot deceived Ed McGinty and had to be cleared off the line by Colm Horgan.

Keena again threatened when he turned well 30 yards from goal and played a fine through ball toward debutant Frank Liivak, introduced shortly beforehand, who was upended in the box but the referee waved away Rovers’ penalty appeals.

Then Moylan had the ball in the net for Shels but sub Sean Boyd was standing in front of McGinty and it was ruled out for offside.

Moylan was again narrowly offside on 86 minutes after Boyd’s flick on and Rovers escaped and battled on as the clock ticked past 90 minutes and into five minutes of added time.

Two minutes into that Rovers had a chance to seal the points. Frank Liivak burst away from the Shels defender Luke Byrne and found Fitzgerald who broke into the box and put the ball around Brendan Clarke who fouled the Rovers’ winger and referee John McLoughlin pointed to the spot.

Next up is a trip to face Bala Town on Thursday evening in The First Round of The Europa Conference League Qualifiers.