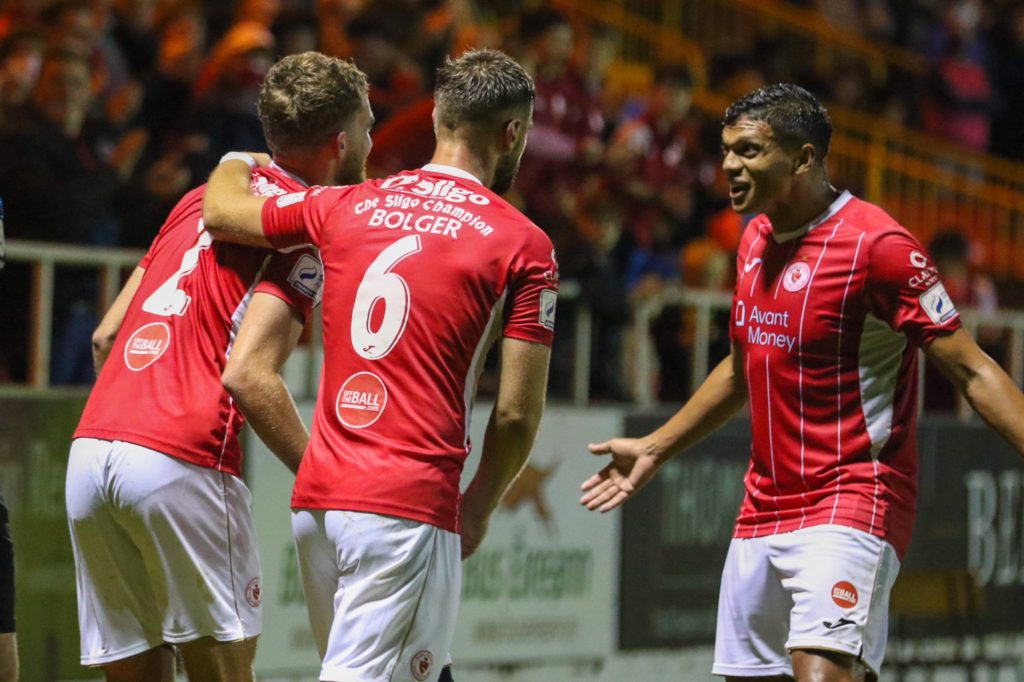 Sligo Rovers moved to within five points of second placed St Patrick’s Athletic as they piled further misery on Dundalk with their second win over the Lilywhites this season.

Vinny Perth’s men took the lead through Pat Hoban in this rearranged tie, but Rovers turned the tide courtesy of Andre Wright’s first goal for the club and Lewis Banks’ winner.

Without a league win since July and missing a number of players due to injury and suspension, Dundalk certainly didn’t look like a team who have taken just one point from their last six league games.

Rovers’ Adam McDonnell did land an early free kick on to the roof of Alessio Abibi’s net, but the visitors improved instantly.

Midfielder Sam Stanton danced his way past two challenges in the middle only to drag his resulting effort narrowly wide of the target. While Sligo’s Ryan De Vries inadvertently played possession straight to Hoban who could only sky from a profitable position after good play down the Dundalk left side.

The hosts were sloppy again on 18 minutes. The usually attentive Garry Buckley with a uncharacteristic slip as he conceded possession. The ball falling to Hoban who again missed the target.

More hesitancy in the Rovers box saw McDonnell and goalkeeper Ed McGinty get their wires crossed. Play finally falling to Hoban who turned the ball home for Dundalk’s opener.

Sligo, who kept faith with the same starting eleven that ended their recent winless streak against Pat’s on Friday, replied straight away.

David Cawley coming short for a corner before sending the ball all the way through to the back post for the waiting Wright to tap home for his maiden goal for the club.

Johnny Kenny, who registered Rovers’ fastest ever penalty against the Saints had his shot on the turn saved by Abibi seconds after the restart. While defender John Mahon did just enough to put Hoban off as he attempted to head home Sami Ben Amar’s centre moments later.

Liam Buckley’s charges hit the led on 51 minutes. Abibi punching Banks’ header from a neatly clipped Greg Bolger set piece over his own head but under his crossbar as Banks wheeled away to celebrate his second of the year.

Kenny looked favourite to win the duel but blazed over whilst one- on-one with Abibi on 61 after Cawley played the perfect ball into the path of the youngster.

John Mahon had the ball taken off his head by a brave Dundalk challenge at the front post, as he connected with a Cawley corner seventeen minutes from time.

Substitutes Walter Figueira and Sligo new boy Mervyn Lorenzen both went close in quick succession in the last ten minutes as Rovers looked to kill off the game.

Dundalk pressed Rovers in added time but couldn’t find an elusive leveller. The defeat is Dundalk’s fifth in their last six league outings.