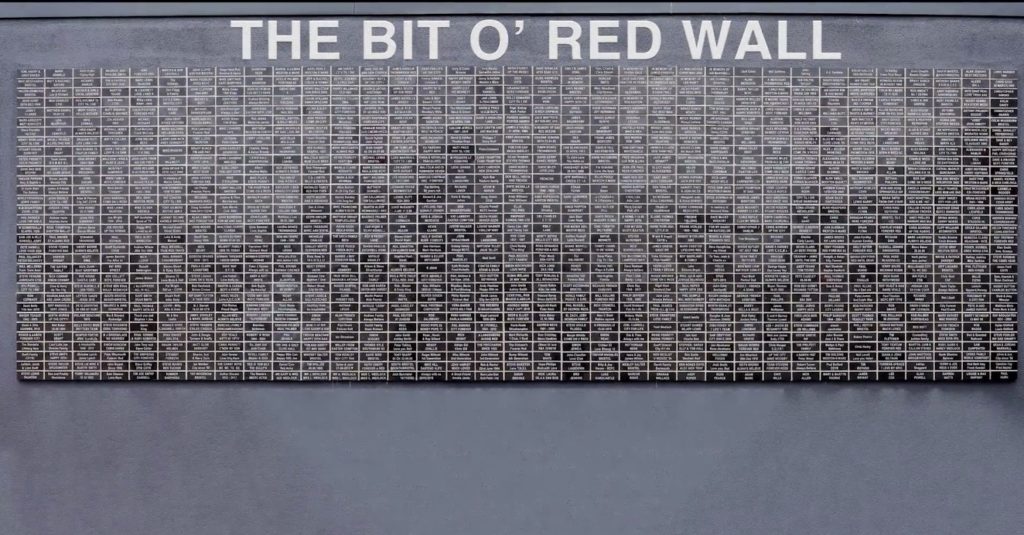 It will give supporters and their family members the opportunity to have a permanent place and link with the home of the Rovers – The Showgrounds.

Alongside the newly-developed outdoor museum, immediately opposite the dressing rooms on the Treacy Avenue side of the ground, the Bit O’ Red wall will be erected.

It will be made up of tiles, supplied by the renowned Boyle based stonemasons, Feelystone. Each tile, costing €100, will have space for 3 lines, with 16 characters per line.

Securing a permanent place on The Bit O’ Red Wall is likely to interest fans who attend Rovers games each season.

It will also provide supporters who are not based in Sligo, including the many who live abroad, with an opportunity to mark their affection for the Rovers.

Another dimension of the project is it will allow an opportunity to remember and celebrate deceased family members and their long association with the club.

Their objective is to raise funds to help with the running of the club but also to organise a scheme that builds the infrastructure of the Showgrounds and enhances the club’s bond with supporters.

Finbar Feely of Feelystone participated in several meetings at the Showgrounds during which the proposal was developed.  The plan is to create a structure that will last and will serve as a reminder of the community-based values at the heart of Sligo Rovers FC.

It is proposed to have the first section of the Bit O’Red Wall erected to coincide with the opening competitive match of the new season.

To secure a guaranteed place, completed applications with full details of the characters for the tile and the €100 tile cost will have to be received by the club before December 24th. The €100 charge per tile includes engraving and tile erection costs.

“This is another part of The Showgrounds we will be proud of. It’s nice for people to be able to put their name in the ground. People have probably seen things like this in other stadiums across the UK or worldwide, but everywhere is different and this is our own with our own supporter’s names included, which many of us will know.

“I know personally my own family will buy a couple of tiles for two family members who are no longer with us, and now will have their own little place in The Showgrounds to remember them and show their love for the club. I also think the project has great potential as a way of marking special occasions – birthdays, retirement presents etc.”

“Since I have come here, I have seen the support and the love for the club that is out there. I remember coming here to play or manage as an opponent, and it was always a welcoming ground but a tough place to come when the supporters were fully behind the team.

“That said, I think this new tile gives supporters a nice chance to have their little place in the ground, and show their support for Rovers, whether they’re able to get here every week or not. I do believe that supporters living abroad or away due to work or whatever the case may be, have just as much importance to the club as anyone else. We are all in it together and I can imagine the number of people buying into this will show that.”

For further information on The Bit O Red Wall, visit The Showgrounds office, our Christmas Store at Barton Smith or online

The Bit O Red Wall – mark your place at The Showgrounds