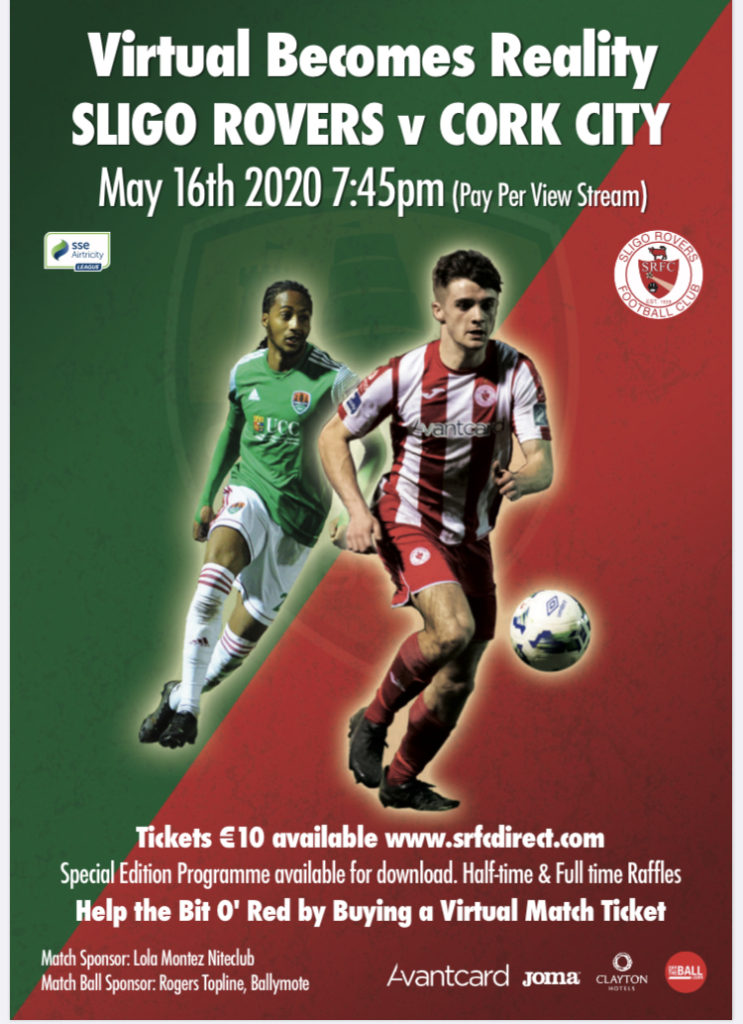 Sligo Rovers will play Cork City on the night the teams were due to play in the SSE Airtricity League as virtual becomes reality.

On the night of Saturday 16 May, the Bit O’ Red will meet the Rebels and we will bring you The Showgrounds experience.

The two clubs are coming together for this joint fundraiser. Tickets will be sold by both clubs.

A match programme, half-time raffle and video walk through of the ground as you take your seat will be present.

The e-programme will be a souvenir item with lots of different features.

Click here to buy the package of match ticket, programme and raffles

The event will be as close to a live television production as possible, with guest interviews and there’ll also be half-time musical entertainment.

Manager Liam Buckley will give his pre-match press conference to the media next week and we’ll also be going through the archives to look back on some of the memorable games between the sides in the last 30 years to whet your appetite.

Supporters will select the Sligo Rovers team to play on the night through a series of social media polls as we build up throughout the week, and we’ll have updates from players on how training has been going to help you choose.

Cork City will have visiting supporters with their ticket sales going directly to the Rebels.

The match will be broadcast live on YouTube, played on FIFA 20, with commentary from RTE Sport’s Adrian Eames and analysis from Alan Cawley of Soccer Republic. RTE Soccer Correspondent Tony O’Donoghue will bring us the news ahead of the game.

We are looking to bring you real match night experience, and for you to show us your #bitored from home on the night.

More features will be added as we build up over the next two weeks, including we as reveal the live interview guests.

A bundle package of a match ticket, programme, half-time and full-time raffle will be €20 with proceeds going to the club. An individual match ticket is just €10. All items are listed here https://srfcdirect.com/virtual-match/

Sligo Rovers chief executive Colin Feehily said: “This is a night to bring the Sligo Rovers community together as best we can.

“We will endeavour to bring The Showgrounds experience to your screen. The Interactive Quiz was a huge success because it brought all of us together for one night and lots of laughs on the way.

“The game will be competitive and you will be directly involved in how we do. It’s time to put points on the board!“

Cork chairman Declan Carey added: “We are delighted to take part in what is another great fundraising initiative by a League of Ireland club. What these times have taught us is that it’s important to pull together in times of need.

“We haven’t kicked a ball since March 6th but this “off-season” certainly doesn’t feel like a traditional one. Clubs are as active as they can be on online channels and social media. CCFC has ramped up our merchandise operation and fundraising efforts and the response has been fantastic.

“We keep a close on other clubs and how they’re dealing with it, and as always, Sligo and their fans are a credit to their town.

“Together we look forward to what will be a fun night for both sets of fans.”